The Story of the Caliph Hakem 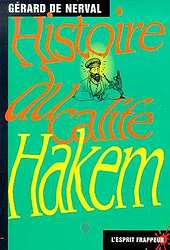 ¨Everyone has their obsession when they are drunk. Yours is to be God.¨

So Gerard De Nerval, a young romantic French author of the 19th century, described the Caliph Hakem in his novella about the founder of the Druze faith. The quotation is made by Youssef, a Sabaean who manages to help Al Hakem - or Al Hakim bi Amr Allah as he is more accurately known - investigate the wiles of hashish on a riverboat on the Nile.

This is one of many inventions De Nerval imputes to the Fatimid ruler of Cairo (996-1021) whose life was bizarre enough without the Frenchman's orientalist intrusions. The Shiite ruler was known for his strict, almost Wahhabist, adherence to his faith, prohibiting alcohol and mulukhhieyeh (a famous Egyptian culinary dish), and placing great restrictions on women, Christians and Jews. In his enthusiasm, he destroyed many churches, including the Holy Sepulcher in Jerusalem - an act that contributed to the arrival of the Crusades some seven decades later.

In a concoction of drug-induced hallucinations, madness, and dopplegangers, Hakem declared himself God, was imprisoned by his Vizier for this blasphemy, and then escaped to find his double, Youssef, in the lap of his beautiful sister, Sitt-Al Mulk.

According to Nerval, Hakem burned down one third of Cairo in the uprising after his departure from the Muristan, or mental hospital.

In fact, this Caliph did declare himself God in 1017. Those who followed him were later called the Druze, named after the man who apparently helped convince Hakem of his divinity - Mohammad Ibn Ismail Al Darazi.

Hakem was also known for his visits to an astronomical observatory in the Mokattam hills, where Cairo's zabaleen garbage village today stands. There he observed a bronze knight set in a circle with the names of all places on Earth written in Chaldaean and pointing to the upcoming Abbasid invasion of Fatimid Cairo.

The Caliph, in addition, was known to ride around Cairo on his grey donkey, "Qamar", and accompanied by his mute slave. According to De Nerval's account, one day, Caliph Hakem went out on Qamar never to return. He met up with three criminals around Cairo's city of the dead, who attacked him with daggers until they realized his identity and ran off. Only his donkey and bloodstained clothes were ever found.

Some believe Hakem's sister had him killed. His future followers, the Druze, believe that he simply disappeared.

Gerard De Nerval's story is very much the seductive and romantic vision that the Orient has inspired in so many Europeans in the 19th century. The writer also drew upon his own tenure in a mental asylum in Paris, as well as from the "Club des Hachachins" in Paris's Ile St. Louis - the same haunt of Delacroix, Daumier and Baudelaire.

But De Nerval mostly bases his book on a tale told to him during his travels in Lebanon in 1843. There, he met a young lady called Salema, the daughter of a Druze notable who was imprisoned by the Ottomans for various mischiefs.

He subsequently met with with this notable - named Al Shirazi - in his prison cell in Beirut, where the old sheikh revealed all he knew about the founder of his faith. This he recounted to De Nerval in Italian, the only common language between the Frenchman and the Lebanese.

At the end of the day, it is not known whether the Druze sheikh al-Shirazi, who spoke Italian and recounted this tale to De Nerval, ever really existed.

All text in this post copyright John Bell and John Zada 2008
Posted by John and John at 11:00 AM