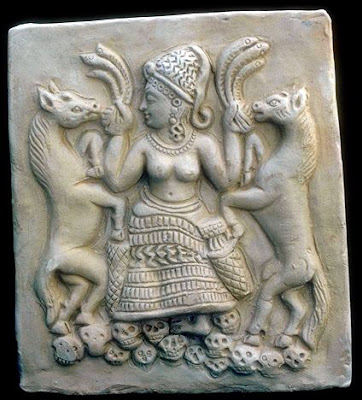 Yara is an artist from Tyre. Her etching of a black and white tiger hangs near her desk in the office where she translates press articles. All day, she spins through the Arabic media searching for relevant articles for foreigners to read and understand her region better. Like many millions in the Arab world, she wishes for a normal life but instead has war, corruption, and limited horizons. She sits and watches as the political robbers or bearded ones have their way with her world.
Yara will never leave her beloved Tyre, her city by the sea - a place once conquered by Alexander and since, transformed from an island into a peninsula. She stands every evening at the rocks above the Christian cemetery where the Temple of Melqart once stood, the Phoenician god of strength and deeds, their Hercules. There, Yara watches the red sun drift into the Mediterranean and then walks home through the narrow streets of the old district where children play like fairies in the night, the sound of the surf mixing with their giggles.
Yara spends most of her day imagining she is an artist in the hills above Tyre, living in a terra cotta home, working with others in sculpture, paint and ceramics, away from the gossip, politics, and restrictions her society places on her.
She has seen the Palestinians use her land as a platform to attack Israel and to liberate their land. She has seen the Israelis invade to get rid of them and then stay in occupation for 22 years. She has seen Shiite militias fight the Israelis and encourage them to leave, and she has spent years in Beirut being shelled by God-knows-who. Yara concluded that politics is a cynical business with no winners and many losers. She gave up her sense of justice, all her ideals, and just cried out for the liberation of her soul. An impossible task among the gossiping women and oppressive men around her day in day out.
At times, she thought she must have once been a woman of ancient Tyre, watching her people make the purple dye that would give them their name in Greek: the Phoenicians. That woman worshipped at the altar of Baal and Ashtarut and looked out at sea for the sailors of Tyre off to sell their wares in Alexandria, Athens, or the Sicilian coast. She saw the invading armies of Assyrians and Persians come in galleys and chariots to her island city and burn it to the ground in a red fire.
Yara knew somehow that her people were still living that memory, in the invading armies of today and in their sense that life was toil and destruction, anger at your neighbour, and survival of the fittest.
But her soul spoke otherwise. She thought there was too much obsession with past glory, land, or sacred texts - all more important than the present gift of being alive. She remembered that we are the source of our happiness, and live the mystery of tomorrow with creativity.
So Yara spent her days and nights imagining a thousand sketches of her tiger, a thousand students working with her, and a few masters with the touch of Florence and the engraved mosques of Isfahan, guiding her. They would learn together what it means to be free to create, to explore what is inside them, and not just who has the latest, hottest, car or what the latest speech was by the demagogue.
She'd need a large degree of courage, and a patron with good money, to break with her family and feuding friends to establish her terra cotta school in the hills above Tyre.

For the time being, she would dream it.
Posted by John and John at 9:16 AM