All text in this post copyright John Zada and John Bell 2008
All photos in this post copyright the Rare Books and Special Collections Library, The American University in Cairo, (AUC)
Levon Boyadjian, or ‘Van-Leo’ as he called himself, was a 20th century portrait photographer who lived in Cairo, Egypt. Working for over half a century, this eccentric Armenian-Egyptian created some of the most stunning, and often bizarre, black-and-white portraits of himself, and others, ever seen in the Middle East.
A strange mix of artist, philosopher, and aspiring actor and director, Van-Leo became one of the last in a line of Armenian photographers that emerged during Cairo’s Belle Epoch: a cosmopolitan period today known for its liberalism, flamboyance, and multi-ethnic flair. He would later come to be seen as one of the first Middle East photographers to employ innovative and creative techniques, fusing glamour photography with documentary studio-portraiture.

Born in the Hatay region of eastern Turkey in 1921, Van-Leo fled with his family at the age of four to Egypt, escaping the genocide of Armenians during, and in the aftermath, of the First World War. As a teenager in Egypt, he became obsessed with Hollywood movie-stars, collecting magazines and miniature cards featuring still images of his favorite actors and actresses in character. Actors like Clarke Gable, Greta Garbo, Gary Cooper, and Marlene Deitrich, and the many films in which they appeared, were memorized and absorbed into the photographer’s psyche. Intoxicated by cinema and living in a fantasy world of fictional characters, games and make-believe, Van-Leo made the decision to leave his floundering studies at the American University and to devote his life to photographing people in the manner of a possessed cinema director with a stills camera.

Van-Leo made his grand entrance as a photographer in Cairo just before the beginning of the Second World War. While Europe regressed into a period of bombings and destruction, Cairo flourished, becoming centre-stage for the intrigues that simmered behind the war's front lines. British soldiers stationed in Cairo, and the countless entertainers that flocked to the city to find work, provided Van-Leo with his first and most cooperative subjects.
Partnering with his brother Angelo, the two siblings opened shop in the living-room of their parents’ apartment in 1941. Often in exchange for a free portrait the photographer would convince his sitters to give him full creative license. His approach was to employ cinematic techniques of artificial light, shadow, and creative poses, to generate charismatic personas that bordered on film noire in their mood and dramatic effect.

As his reputation grew, countless people flocked to his studio to be photographed, from army officers, to aristocrats, to cabaret dancers, to singers, to actors, expatriate foreigners and Egyptian commoners from all walks of life. The famous too would be drawn by his flair for playfulness and creativity in the studio. Writer Taha Hussein, actors Omar Sharif, Rushdie Abaza, and Samia Gamal, and the singers Farid al-Atrache and Dalida were among the many notables who passed through Van-Leo’s studio and whose images today still periodically appear on walls, books, newspapers, magazines, and on television in the Arab World. 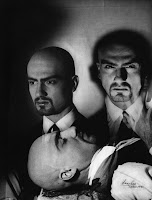 But within photography circles Van-Leo is just as much known as a self-portraitist, having taken hundreds of photographs of himself disguised as just as many characters. His fictional avatars ranged from Zorro to Rasputin to Sam Spade and all manner of personas in-between from a shirtless Bohemian, to a Cossak Prince, to a Geisha girl, to a pipe-wielding steam-ship Captain, to a British fighter bomber. Each of these images provides a key to the deepest depths of Van-Leo’s psyche, linking the observer directly with a man who wanted to live every fictional character in endless worlds of his own making. Living as a minority Christian foreigner in a predominantly Arab-Muslim Egypt, his self-portraits are also a clear reflection of fundamental identity issues. He deals with the reality of who he is by reveling in his lack of attachment to any nation or creed by literally becoming anyone he wants.

These same social and political mores that affected Van-Leo’s private life would deal the photographer his final and most serious blows where his work were concerned. With the rise in the latter part of the 20th century of socialism in Egypt, and later, Islamic extremism, and with the flight from Cairo of its foreigner and liberal classes, Van-Leo found his pool of subjects ever-dwindling. Also vanishing was an epoch in which manners, civilities, pomp and glamour had characterized photography - and by extension, life at large.
The transformation of Cairo into a more homogenous, more religiously conservative and less tolerant society, combined with the rise of instant-development color-photography, challenged Van-Leo at every level as an artist and as a photographer. No longer could he create his film-noire style portraits as easily as he once had. The glamour, shadow and fantasy that once marked his photographs were slowly replaced by big hair, bright colors, and bland faces - all wrapped in a mood of conservative sobriety. Unlike many of his artistic contemporaries who eventually fled to Europe and beyond, including his brother Angelo who moved to Paris in 1961, Van-Leo stubbornly chose to cling to the past and remain in Egypt, continuing to attempt his unique brand of photography late into the 20th century. This he would do despite the deteriorating artistic environment and growing disapproval of his aesthetic that existed in many quarters.

This downward spiral continued into the 1970s and 1980s until his “rediscovery” by a group of foreign expatriates in the 1990s would revive his art and popularity, helping to garner for him the international recognition and accolades which he so much sought. But despite the late resurgence of his art and his name, he continued to see himself until his death in 2002, as a victim of history, a living relic of a tragically forgotten age. 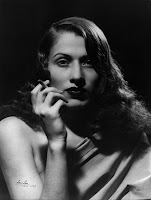 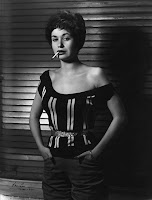 Van Leo’s importance as a photographer in the early photographic tradition cannot be overstated. His portraits covering six decades of life in Cairo are an important social and historical document of Egypt and the Middle East, and of its sudden and radical transformation as a society. He was decades ahead of his contemporaries as an artist and had an experimental attitude, seen especially in his self-portraits, that was very rare at the time and is still rare among photographers in the Arab world today. His story exemplifies the extent to which one’s environment, its society and politics, can impact or even dictate the life and work of any given individual, especially an artist.
Posted by John and John at 11:51 PM