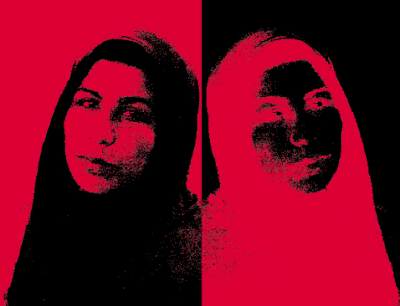 "Religion is a field unplanted except by those who accomplish an interest from it - return.
If it were not from fear of hell, none would worship any god;
And if not for the expected rewards, they would deny God."
- Khalil Gibran

*
Fortunately, and occasionally, some come to live another religious reality.

Rabia al-Adawiyya, a woman and a mystic from Basra of the late 8th century, is one such person. Her early and formative life was most difficult. She was orphaned as a child, kidnapped by slave traders, sold for six silver pieces and only freed her when her master was astounded by her saintly conduct.

Over time, and to free herself from all enslavement, Rabia pursued the most difficult of roads: the freedom to worship the Divine without temptation, distraction or ulterior motive. "I will not serve God like a labourer in expectation of wages," she said, and went on to transform herself from a suffering child of Basra to an ascetic, and then to most ardently seek her freedom through the Sufi way.

Asceticism is not encouraged in Islam, a religion that puts much more emphasis on being a normal member of society, and providing service to the development of humans. Yet, Rabia shirked the regular life. She had few belongings, carried a stick and wore an old patched mantle and worn sandals. She would spend the night praying on the rootops of her city, and denied herself motherhood and love for a man.

Even though she thwarted the normal life and embraced a more radical road, it may be that "the imbalance of the thoughtful is much better than the conservatism of one who takes no thought." (1)

Indeed, her extremism came from a noble and intense source: a wish to worship out of complete freedom, and out of her own (and not any other) choice.

What little we know of her life comes to us by way of Farid al-Din Attar, a major Muslim luminary who lived in the 12th and 13th centuries. He devotes a chapter to Rabia in his Tadhkirat al-Auliya (Memorial of the Saints) - a compilation of biographical anecdotes from the lives of Islamic mystics.

Ever since her death, Rabia has been revered among her own kind as one of the most realized of beings. She has come down through history as a beacon to all who suspect, or know, that there is a greater reality than the ironclad materialism and seductive ideologies that we often embrace. Rabia was also an exemplar to people, both now and at the time, that the path of knowledge was not just something restricted to men.

Today, she is most well known for her saying, that was sure to have inspired Gibran to his:

(1) Much of the material for this entry is drawn from the book, ¨First Among Sufis - The Life and Thought of Rabia al-Adawiyya¨, by Widad El Sakkakini, 1982
Posted by John and John at 4:14 AM

Living from the Heart said...

Thank you for writing this piece. I too am about to write about Rabia for my blog - a year with my heroines. I am amazed that Rabia's story hasn't reached more people and been celebrated in the way it should be. What an incredible woman. Thank you for your sensitive and illuminating writing, Sophie