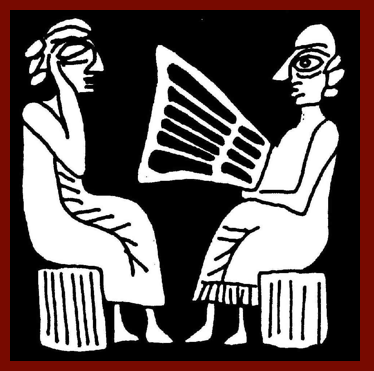 In 1972, after 15 years of research, Dr. Anne Kilmer (professor of Assyriology at the University of California, and a curator at the Lowie Museum of Anthropology at Berkeley), transcribed one of the oldest known pieces of music notation in the world.
Clay tablets relating to music, written in the cuneiform "Ugaritic" language (with both Hurrian and Akkadian influences), were excavated in the early 1950s at the ancient Syrian coastal city of Ugarit at what is now Ras Sharma. Ugarit is considered the birthplace of the modern alphabet.
One text contained a complete hymn, both words and music and is the oldest known preserved music notation in the world. The tablets date back to approximately 1,400 BC and contain a hymn to the moon god's wife, Nikal. Remarkably, the tablets also contain detailed performance instructions for a singer accompanied by a harpist as well as instructions on how to tune the harp.
From this evidence, Professor Kilmer and other musicologists have created versions of the hymn.
One of these adaptations, came to life in a performance in Atlanta recently. The instrumental piece is entitled, Echoes from Ugarit and was performed by Syrian pianist and composer Malek Jandali along with The Ludwig Symphony Orchestra.
Many thanks to one of our readers who brought the story to our attention.
Posted by John and John at 2:34 PM