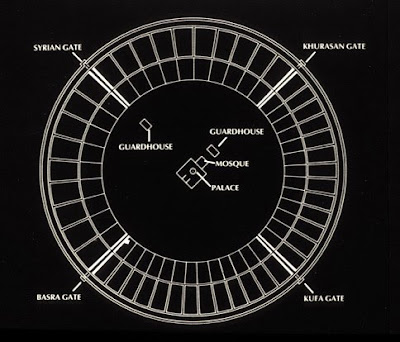 In August of 762 AD the second Abbasid Caliph, al-Mansur, decided to relocate his residence from the city of Kufa in modern day Iraq, to a nearby area which he would call Dar al-Salam (the Abode of Peace). His new capital, which would also be referred to by its pre-Islamic name of Baghdad would become the seat of the Islamic empire and one of the greatest cities of its time.

Its convenient location with caravan routes to Syria, the Hijaz, the Iranian plateau, as well as its easy access to water sources, made it an ideal spot for a new city. The Caliph assembled engineers, surveyors, architects, artists from around the Muslim world to come together and draw up plans for the city which was designed with the utmost beauty and technical perfection in mind. Work was completed on the capital about 4 years later in 766 A.D.

The original framework of the city was circular, being over 2 km in diameter, causing it to be also be known as “al-Mudawara” or “the Round City”. This design has its roots in the Parthian Sassanid tradition and some of the key masterminds of the project are reputed to have been Persian.

Three concentric circular walls made of towering mud brick enclosed residential, administrative and business quarters. Within the innermost circle stood the caliph’s residence and the mosque. The walls were pierced at inter-cardinal points by four gates that opened towards Kufa, Basra, Syria and Khorasan - with roads radiating out in those directions.

With the city eventually outgrowing itself and then later being destroyed, nothing of Baghdad's original construction remains and whatever ruins might still exist are likely buried deep beneath the modern city.

Click here to view a video showing a digital recreation of the city.