The Cult of Khat 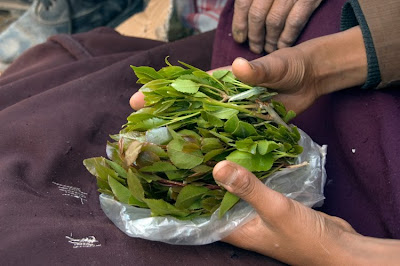 Any travel to Yemen nowadays, particularly by those for whom the Middle East is something of a novelty, tends to include dabbling in the popular Yemeni pastime of chewing khat – a locally grown flowering plant that contains an amphetamine-like stimulant causing a mildly euphoric, uplifting effect. Trying khat and reporting on its subtle, amorphous effects to friends back home has become so de rigueur that it is now almost something of a cliché – not to mention a kind of right of passage or experiential badge for aspiring Arabists travelling the Middle East circuit.
Not that they can be entirely blamed. For this socially-sanctioned drug is employed ritualistically and en masse in Yemen, with a large portion of the day being allocated to its use. It is an omni-present fact of life as well as a tool of social cohesion that is difficult to avoid for any visitor seeking an easy inroad into the local culture.

This widespread practice of chewing khat, which in recent decades has grown to become a national addiction, was neither always the problem that it is today nor is it an issue confined to just one or two dimensions of consequence. It can even be said that the future of Yemen and its development as a nation is powerfully impacted by the question of khat use and the implications surrounding it.

The plant is believed to have come to Yemen around 400 years ago from Ethiopia. Similar geographic and climatic conditions made it a perfect transplant location. For centuries, it was only the very rich and the elderly who chewed the plant, and only occasionally; often during official meetings and political discussions to empower and enliven debate. Otherwise use of the drug was strictly confined to only a few hours in the early afternoon.

It was only in the aftermath of the first Gulf War, when approximately 4 million Yemeni workers were expelled from Saudi Arabia for their government siding with Iraq against the international coalition, that the khat industry exploded. Many of the unemployed repatriated Yemeni workers took to the khat fields to find work, while others, with little to do, began to use the drug themselves. The wave soon spread to university students, women and children (some as young 7) - traditionally non-users of the drug.

Today, khat production constitutes a major industry in Yemen with powerful vested interests. Countless people are employed in the business of growing, delivering or selling khat – around 10% of the population. The Yemeni government itself derives money from the taxing of wealthy khat merchants and the slapping of tolls on the transport of the drug, by way of checkpoints along the roads on which they’re delivered.

The plant is mainly cultivated in northern Yemen, especially in and around the towns of Sana’a, Haja, Taiz and Ibb. Numerous varieties of the plant are grown, and like all fruit or vegetable produce can be divided into superior and inferior strains reflected by price and availability. The “best” quality khat can be described as having the smallest leaves and is light green in colour, with thick, whitish stems. Red stems reflect a lesser quality plant which translates into lesser or negligible psychological effects.

Less known or discussed are the numerous problems associated with the growth and consumption of the drug, which include:

• The loss of even more precious water resources used to cultivate khat. Estimates are that 40% of Yemen’s water supplies are being used to grow the drug.

• Too much money being spent on khat by an underclass that has very little income to begin with, thereby helping to perpetuate poverty in Yemen.

• The negative physiological effects, chemical dependency and long-term changes to the brain resulting from prolonged use of the drug

With millions of Yemenis using khat on almost a daily basis, it is easy to see how any discussion about the future of this ancient country (one of the oldest and most culturally intact in all of the Middle East), will depend upon the ability of Yemenis to end their dependency on, and reduce to the most moderate levels, their use of this powerful plant. 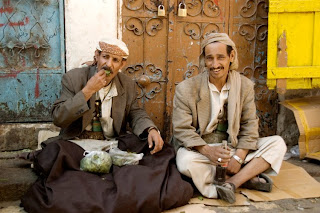 All images and text in this post copyright John Zada and John Bell 2009
Posted by John and John at 2:22 PM

fllawi is a travel agency which is located in Jeddah of Saudi Arabia. Many people from the world to Saudi Arabia which is the most historic place from Muslims. We provide all the services to the visitors who book our services among the Saudi Arabia country. We provide adventure, historical, outdoor, city tours. we have a professional staff where providing the best service to our customers from many years Tourism services