The Sun is Satisfied 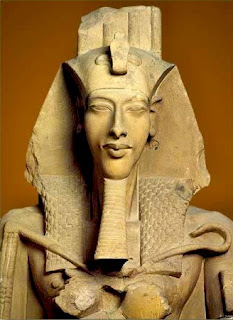 “We will die if we do not create gods. We will die if we do not kill them.” - Adonis (Syrian poet)
In the 14th century B.C., a man called Amenhotep changed his name to Akhenaton. With this move, he set about changing the culture of Egypt from one that reveres a pantheon of gods, with "Amon" as the top god, to the worship of a one god, "Aton", the sun.

Akhenaton was not however an average citizen - he was a pharaoh. He was the first monotheist in his world, a revolutionary, in a very traditional society. This king removed the Egyptian gaggle of gods in favour of a one god.
Akhenaton also directed his nation away from imperial ambitions and stopped its aggressive drives against other countries. Instead of pursuing adventures to prevent domestic revolution, he did the opposite.
In the religious field, he did the unthinkable and prohibited the use of the word “gods” in favour of Aton. Indeed, he viewed his god as being for the whole world and not just for Egypt. He did what he could in his time for people to get away from worshipping images in their minds and to permit a greater reality to set in.

Akhenaton suffered from a strange physique, and may have had the genetic disease called "Marfan’s Syndrome" - an ailment that Abraham Lincoln may have also suffered from. Akhenaton represented himself in portraits and sculpture as he really was, deformed – unlike the idealized representations of other pharaohs.

Naturally, Akhenaton ran up against heavy turbulence from the priests of Amon - the elite of Egypt - who despised his changes and fought against him. They ultimately triumphed, destroying his newly-built capital of "Akhetaton" ("Horizon of the Sun") defacing his images.

Some of the benefits of Akhenaton’s revolution nevertheless included:


In case it looks as if Akhenaton’s story sounds like a distant fairy tale, some believe that Moses, who was raised in Egypt and had an Egyptian name, may have been Akhenaton’s contemporary and may have acquired his notions of monotheism from the great pharaoh himself. It is therefore possible that without Akhenaton’s intellectual courage, without his desire and commitment to renew his culture, Judaism, Islam and Christianity - all branches of the Mosaic tree - would not exist as they do today.

It may now be time for new ‘Akhenatons’ in the Middle East - not pharaohs, but people who wish to live without evil spirits, demons and darkness - to cut away the dead wood from the Mosaic tree, and so improve its chances for growth.
Akhenaton means “useful for Aton” and it also means "Aton", or "the sun, is satisfied."
Posted by John and John at 3:29 AM