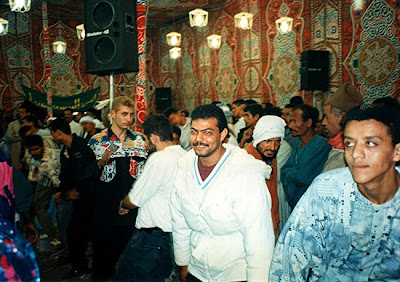 Text and Photo in this post copyright John Zada and John Bell 2008
This week the city of Tanta in Egypt's Nile Delta region swells to over 2 million people in the annual moulid celebrating the birth of one of Egypt's most popular saints: the 13th century medieval mystic, Sayyid Ahmed al-Badawi.
Falling at the end of the cotton harvest every year, the festival attracts people from across Egypt and North Africa who come to pay homage to Badawi (1194?-1273?), who travelled to Egypt from Morocco and who made Tanta his home. A mosque in his name, containing the tomb where he is interred, has long been a place of pilgrimage and is at the epicenter of the moulid, which is one of the largest religious festivals in the world.

Spanning several days, the moulid is a veritable carnival that combines musical, religious and amusement park attractions. Men, women and children - whole families - pass the night in Tanta's streets which are transformed by the moulid into labyrinths of florescent lighting, ornate tents and shops selling anything and everything.

Despite the celebration's religious bent, the festival is first and foremost a social occasion where people come out to have fun, forget their problems, and break free - albeit temporarily - from the narrow strictures and controls of a growingly conservative society.

The memory of Badawi, a man whose reality is probably now all but forgotten, is kept alive by a modern personality cult made up of self-styled religious adherents who claim to be working in his spirit, and through his mandate. Large, colourful tents booming with songs, chants and traditional music - blasted through massive speakers - stir worshippers into emotional frenzies. Others, motivated by every manner of want and need, and overcome by emotional outpourings of every sort, flock to Badawi's tomb in search of miracles, favours and redemption.

Watching nearby, and unable to curb the appetites of the masses, are the state-sanctioned religious authorities of al-Azhar and members of the semi-outlawed conservative opposition, the Muslim Brotherhood. They can only roll their eyes in annoyance at so large a flaunting of heterodoxy - one that inspires unease in the minds of those who seek to impose a different flavour of conditioned behaviour and control.
Posted by John and John at 11:50 PM