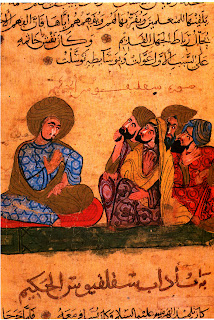 “A Zen master remarked: ‘Renunciation is not giving up the things of the world, it is accepting that they go away.’ The result of such acceptance is fulfillment, not deprivation.”
- Dr. Arthur Deikman, in The Observing Self

Hasan of Basra was an early Muslim savant and mystic born in the city of Medina in 642 AD. The son of a slave, he grew up to be a theologian and established a school of religious thought in Basra (modern day Iraq), which taught several generations of students. He was considered by many to be the most accomplished luminary of his time. Today, after over 1,000 years, he is still revered as one of the greatest saints in early Islam.

At a certain point in his life, Hasan became distressed by the corruption and material excess of his nascent society. In order to oppose and mitigate the effects of these developments, he increasingly threw himself into a life of piety and self-denial. Like many Islamic mystics who lived in the period immediately after the prophet’s death, Hasan began his journey towards self-knowledge as an ascetic.

The influence of nearby religions (notably Christianity and Hinduism) as well as certain interpretations of the Koran, helped to popularize asceticism as an approach among the spiritually minded. Because most religious traditions (including Islam) espoused a certain degree of abstemiousness and renunciation as a means to freeing mental capacity for greater learning, and because some individuals always confuse a means for an end, renunciation was embraced by some in the extreme.

Ascetics often went to great lengths to pursue their objectives. The practice of celibacy, of placing one’s trust in the divine for physical sustenance, and a firm rejection of family and material life were all hallmarks of a difficult regimen of self-denial. These activities a times included cumbersome mortifications and self-imposed hardships that were very painful.

Whatever his exact motives, or where he may have fallen on this spectrum, Hasan’s experience as an ascetic led him to a key psychological insight that was to become one of his better known contributions to the field of spiritual development:  the idea that privations meant to weaken desire and the Self could have an opposite effect; and that asceticism can be a masochistic and self-indulgent desire that may feed the very ego which the aspirant is trying to reduce and contain.

Hasan would eventually state as much publicly, echoing statements made by the prophet who discouraged extreme self-denial in Islam. According to esoteric streams within Islam, the developmental work of humankind necessitates being in close proximity to the world and to society - and not living permanently as a recluse outside of it.

By virtue of his life and teaching, Hasan struck a balance between those revelling in the materialism born of the success that came with the consolidation of a new empire, and the extreme reactionaries who sought to deny themselves those same fruits: two groups who constituted two sides of the same coin.

Hasan’s comments about asceticism were also, in themselves, advances in the field of human psychology – a discipline at the crux of all real spiritual systems, which the Arabs were to develop and master long before the appearance of either the likes of Sigmund Freud, or Carl Jung.

Even those iconic fathers of modern psychology - in spite of the praise and worship heaped upon them - scarcely touched upon the profound understandings which people like Hasan of Basra, and other Sufi luminaries, were to develop and refine over several centuries.