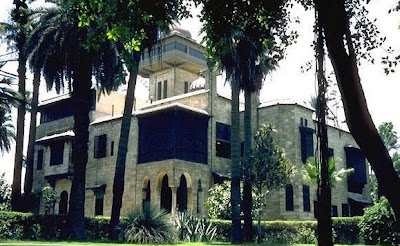 Located a few kilometers from downtown Cairo, on a lush plot of land on Roda Island, sits one of Egypt’s little known architectural treasures. The walled complex, known as Manial Palace, is an ornate monument to Egypt’s belle époque period built by a crown prince of the country’s former royal family.
Prince Mohamed Ali Tewfik, the younger brother of Egypt’s Khedive Abbas Hilmi II, and uncle of King Farouk, made the palace his pet project and lifelong obsession. It was built and furnished in successive stages during first 30 years of the 20th century. 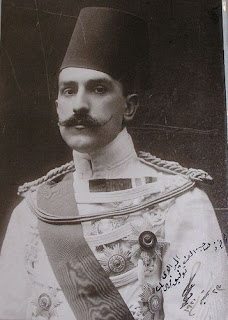 After attending school in Europe and traveling the world, the young prince returned to Cairo and decided to construct his own quarters away from prying eyes. His mother suggested 15 acres of gardens filled with banyan trees on Roda Island, off the East Bank of the Nile. In 1901, the 26 year-old Tewfik began construction on his saray-cum-island-retreat, naming it after a Mameluke nobleman who once resided on the island.
For Tewfik, the project allowed him to pursue another passion that ran in parallel – the world of Islamic art and motifs. The prince scoured the world for objects, sending his agents far and wide to look for rare pieces of art. He hired some of the most skilled professionals in Egypt at the time - including Mohamed Afifi and Antonio Lasciac - to design and furnish the various chambers in elegant Ottoman, Mameluke, Moroccan, Persian and Moorish styles. Cairo’s Ilhami School of Crafts-Making, a waqf, or religious trust patronized by Tewfik, also contributed works to the palace. A Rabat-style Moroccan lookout tower and stables for Arabian horses would also grace the property.
“He always meant the palace to be a museum where young people could come and learn,” said his grandnephew. “If they could not travel, they could come here and see all the styles.” 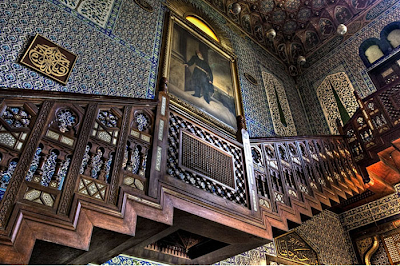 As the Manial Palace flowered into mature elegance, it became a gathering spot for all manner of foreign and domestic personalities at the time including writers, poets, journalists, musicians and diplomats. The compound became a world of high society interactions combining tea parties, evening galas, and private impromptu meetings of members of Egypt’s royal family.
After the 1952 revolution that overthrew the country’s monarchy, the compound and all its furnishing were confiscated by the Egypt’s Supreme Council of Antiquities. The Manial Palace is now an art and botanical museum open to the public. 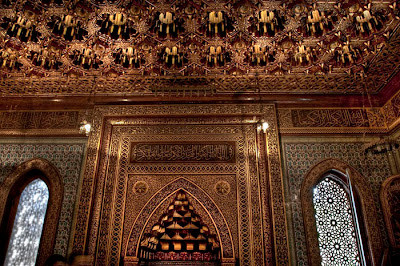 It's been closed for some time for renovation - are you certain it has reopened?

The beautiful tile work of the entryway that you show here was made by my grandfather, the Armenian ceramist David Ohannessian, who was a master of the Kutahya (Anatolia--Ottoman) tradition. The Manial Palace tiles were made while he was still working in Kutahya, before he replanted his art form in Jerusalem in 1919. Do you have any more pictures, by any chance? If so, I would be grateful to see them.

Hello. Belonging to the Ottoman Sultan Sultan Abdulaziz in the museum is the line sheet've flank. This work is it possible to get the photo from you? If you have a publication konud reference in this show. Greetings.
Dr. Zübeyde Cihan Özsayıner
Turkish Foundation Calligraphy Art Museum Director. Art History Expert
zcozsayiner@hotmail.com
0505 4969047