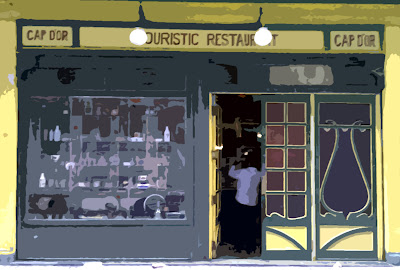 For conservative Egyptians, this bar, located on a side-road off Saad Zaghloul Street in Alexandria, adds a certain insult to injury with its unorthodox appelation. Seldom has an establishment selling alcohol in the Middle East found itself with a name better suited to a mosque, a holy shrine, or a person of religious piety. But then again, Alexandrians have always had the reputation of being a little more open-minded about things.
This famous watering hole, which opened circa 1900, was called Cap D’Or (not to be confused with its notorious imposter on Abdel Khalik Tharwat Street in downtown Cairo). Two Greeks and a Frenchman were the proprietors of the bar - one of a cluster of venues in the neighbourhood catering to the city’s cosmopolitan socialites. Egyptian aristocrats, politicos, foreign expatriates, businesspeople, and artists all flocked there to eat, drink and make merry.
When the 1952 socialist revolution took place, the foreign owners of the bar, like many others, decided to pack up and leave the country. Before departing, they sold Cap D’or to a local man named “Ali”.
But unlike subsequent owners of the bar, Ali decided to close on Fridays (the Muslim sabbath). So when clients came to the bar that day, only to find its doors shut, they began to refer to him as “al Sheikh Ali” - the "sheikh" being an honorific designating piety, respectability and knowledge, especially of a religious type. And like all nicknames of genius, it stuck like glue.
Ali’s son now runs the joint. It retains its art nouveau décor and is one of the most popular old-school drinking shacks in the country. The bar has its own regulars and has a bit of a cliquey, clubhouse feel to it. Henry Kissinger is said to have made a stop here in the 1970s, between his diplomatic hobnobbing, to have a cold Stella.
Posted by John and John at 7:07 PM