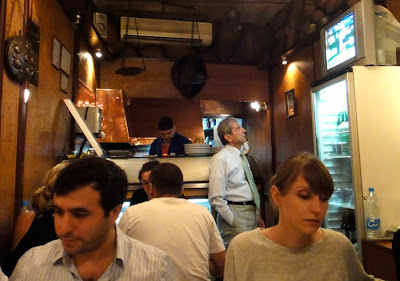 The usual Lebanese fare is on offer here – and all of it is extremely good. The prize dishes are the sujouk (spicy Armenian sausages), chicken livers, makanek (Lebanese sausages), b’tata harra (spicy homefries), and the raw kibbeh. To wash the whole thing down, order a bottle of locally made Arak (diluted with water in a pitcher and served in small glasses with ice cubes).
The novelty of the Varouj experience is amplified by the absence of printed menus or listed prices of any kind. Food is ordered ad hoc depending on what the master of ceremonies has available that day - and what he thinks you should eat!
At the end of the smorgasbord the host haphazardly tallies the meal price in an indecipherable chicken-scratch and throws it on the table. But it’s invariably less costly than what you'd expect to pay for such a meal fit for a king.
We’d add a few lines about how to find the place, but getting there through one’s own efforts is half the reward.
Posted by John and John at 5:30 PM