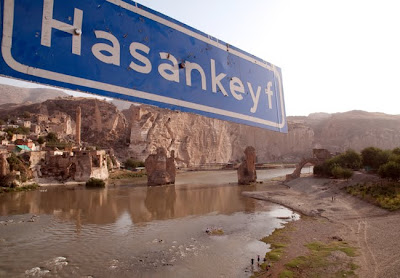 Situated on the Tigris River in southeastern Turkey, the village of Hasankeyf may be the oldest continually settled town on earth. It is a painfully picturesque place embodying 10,000 years of history and clinging dramatically to limestone cliffs peppered with medieval Islamic monuments.
Anyone who visits Hasankeyf can’t help but be smitten by its ageless disposition – one that inspires an unconscious nostalgia for that pivotal moment when pre-history gave way to the earliest refinements of civilized life. If there’s any place where our ancestors decided to give up the countless millennia of wandering begun in Africa, in favor of something slightly more palatable, it is likely here.
Neither the area’s harsh climate nor the vicissitudes of empire (including the brutal 13th century onslaughts of the Mongol hordes), could dislodge this honey-toned Silk Route station, and its people, from the banks of the slow moving Tigris. Which is why it’s ironic that in an era of relative calm for the area, and after weathering all that Time could throw its way, Hasankeyf now finds itself a village waiting to die.
If all goes according to the plans of Turkish developers, Hasankeyf, and other towns like it will soon be underwater. Turkey’s long-running Ilisu Hydro-Electric Project, designed to dam the Tigris and which is now slated to be completed in 2013, will create a 300 square kilometer reservoir along the river’s basin running north from the dam.
That man-made reservoir will submerge Hasankeyf and drive away its Kurdish inhabitants - many of whom were once semi-nomadic, and who, until recently were eking out a modest but happy living from the region’s limestone caves (before being resettled by the government to newly built homes).

The Ilisu dam project has been in the works since the 1950s, but because of periodic political, economic and military upheavals, has continually gone into abeyance. Since the project's inception, Hasankeyf has been living on borrowed time, its imminent demise declared each time the project seemed to be near completion.
Proponents of the dam say it will give a new lease on life to a region which is moribund and poor. Power-generation, irrigation, jobs and aquatic tourism are just a few of the perks being cited by Turkey’s doyens of progress.
Others, who are just as married to their convictions say the dam will destroy Hasankeyf - an archaeological, cultural and human loss too valuable to calculate. They, the heritage activists, say that the town should instead be managed by archaeologists and historians whose work there, they claim, has hardly begun.
Caught in the middle of this tug of war are Hasankeyf’s inhabitants who are fed up from having to live in a kind of in-between zone, where the present is constantly being overshadowed by a future too imprecise to properly fathom. They say that living that uncertainty is much worse than having to face the town’s eventual fate – whether a flood of Biblical proportions, or years of archaeological excavations that will mean further relocations and the picking apart of a village already fragile and in some places, falling apart.
In the meantime, Hasankeyf’s inhabitants continue with their daily struggles, without a firm knowledge of when those changes will finally come, nor an idea of why others cannot accept the town, and their area, for what it simply is – and no more. 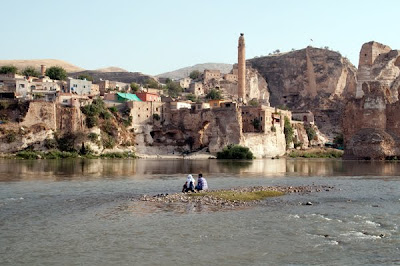