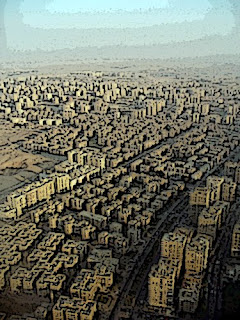 The UN released a report earlier this week stating that a large number of urban areas in Asia and Africa today are blanketed by a toxic cloud of pollution caused by automobile and industrial emissions, slash-and-burn agriculture, coal burning and cooking fires.

The cloud, which varies in its intensity and area of coverage, has blotted-out the sun in certain places, altered weather patterns and negatively impacted the health of millions of people.

This is no news to Cairenes who, in addition to having to bear some of the worst air pollution in the world, have had to suffer the dreaded "black cloud" which for over ten years has descended upon the city for a number of weeks, every autumn.

This so-called "black cloud", a discernible spike in pollution, is attributed to Egyptian farmers in the Nile Delta region who practice the burning of rice straw after the harvest. Anyone who has travelled through the Delta at this time of year can attest to the large pillars of smoke that can be seen pluming upwards across the horizon from all directions. The smoke collects and then drifts towards the capital where meteorological conditions in autumn trap the pollution in the lower atmosphere.

Despite the undeniable contribution that rice straw burning makes to Cairo's severe pollution, the black cloud is much more than just a perennial agricultural phenomenon. Smog from traffic, industrial pollution, and the burning of garbage - another widespread practice in Egypt - make up the lion's share of that black cloud. It is a year-round condition, which only becomes more discernible and intolerable as autumn rolls around.

The good news is that some progress has been made in convincing farmers to stop burning rice straw. Delta farmers have begun selling their rice straw to factories that can turn it into animal feed or biofuels. As a result, the "black cloud days" - a seasonal tally of the worst daily spikes in pollution - have dropped in number over the last few years.

The not so encouraging news is that this effort, as laudable as it is, is only a tiny step in what has to be a more willful and comprehensive effort to reverse Cairo's air pollution.
Unless Egypt can get its worst polluting vehicles off the streets, clean up its industries, better manage its population, and instill a new awareness of the environment, the dreaded black cloud will never go away. Instead it will only thicken and expand, impacting the lives of countless millions of people for whom a breath of clean air has become an unimaginable luxury.

All text in this post copyright John Zada and John Bell 2008
Posted by John and John at 10:32 PM