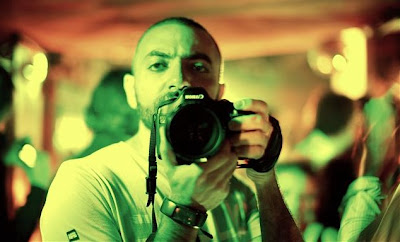 Photo Courtesy of Chadi Younes
All text in this post copyright John Zada and John Bell 2008
The impression one gets of Chadi Younes is anything but that of a man whose life is split among cities spread across colliding hemispheres and cultures. But if asked, this is exactly how he would describe it. His serene, almost sedate, manner - one more appropriate of a Biblical shepherd than of an international, jet-setting, ad director - belies this fact.

We are at Wanda’s Pie in the Sky - a café and bakery in the quasi-bohemian Kensington Market district of downtown Toronto. It is Sunday and the street teems with shoppers and drifters idling away the afternoon. Although Younes, just back from a directing job in his native Beirut, is visiting this neighbourhood for the first time, he appears as much at home here as any of the Torontonians ambling leisurely past our table.
"Beirut and Toronto, my cities of residence, are complete opposites," Younes says. "They mirror the opposites in my personality, which is why I have to constantly go to one to get away from the other.”

Younes, 36, is one of the Middle East’s most promising directors whose synergistic embrace of both eastern and western cultural influences has made him one of the more highly sought after ad directors in the region. Constantly skipping between the cities of Beirut, Cairo, Dubai, and his newly adopted Toronto (where he makes the occasional appearance for R&R after his lengthy jaunts in the hyperactive capitals of the Arab World), Younes is a gipsy in the truest sense of the word.

Admitting to being part of a generation which he describes as “not feeling at home anywhere”, and wanting to embrace all cultural influences, Younes has made the fusion of East and West his calling card. And you can see it in his work. He has directed commercials for MTV Arabia, Showtime, Vodafone, Snickers, and many others – all of which are geared towards Arab audiences, but which are crafted with a directness and edge that are more typically western in style. His use of unusual characters, humour, strong art direction, rhythmic cuts to music, ambient light, and wide camera apertures, typifies his work and sets it apart from that of his contemporaries in the region.

After working several years, first as an Art Director and then an Associate Creative Director at the BBDO Advertising Agency in Dubai, Younes decided to leave his job in 2003 to try his luck at directing his own commercials. The combination of his experience at BBDO, his good contacts, his enrollment in the odd filmmaking course, and a strong foundation in stills photography, helped Younes get off to a solid start. In 2005, he directed an ad for “Barbican” – a non-alcoholic beer that was considered a huge success and became a creative benchmark for television advertising in the Middle East. He attributes a big part of his success to selecting work that is intelligent, interesting to watch, and which allows for his own creative input.

“I like to put myself in the shoes of the viewer before I create something that invades his or her space,” Younes says. “I feel it criminal to invade someone's home with material which is not watchable. So I try to take care with what I select and craft.”

Despite his success at finding interesting projects, Younes admits that there are limits to working in the Middle East.
“Clients are generally fearful and cautious in this part of the world,” he says. “Any approach which is deemed risky or in the slightest way sensitive is quickly shot down. There’s a lot of self-censorship.”

In addition to wanting to work on more projects in North America, Younes is planning to try his hand at short films, and to direct more music videos.
His most recent music video was made for Rima Khcheich, a Lebanese singer whose style Younes describes as a "jazz classical Arabic fusion." This video, called Haflit Taraf was "directed in a way to express visually what the Lebanese people have been going through of late," Younes says.

To view a few of Chadi’s MTV Arabia ads, click here and here.

this is a great piece on an exciting middle eastern artist.

the nomadic state referred to is something that resonates with plenty of us x/y-gen Middle Easterners.