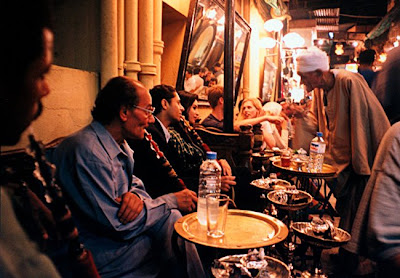 All text and photos in this post copyright John Zada and John Bell 2008
Barring times of war, domestic turmoil, and national emergency, al-Fishawy cafe - located in the Khan al-Khalili district of Islamic Cairo - has been serving customers non-stop for over two hundred years.

This 24-hour 7 day-a-week establishment, located in a narrow alleyway just off of Midan Hussein, began as an informal meeting place with coffee after evening prayer. The meetings were hosted by a man whose name we know only to be al-Fishawy. As time went on the gatherings grew, tea and sheesha tobacco were added to the menu, and the clientele ballooned. Today al-Fishawy's is run by the descendants of the cafe's originator and has become one of the most famous coffee-shops and social gathering places in the Middle East.

The old adage of location being the primary factor in a business's success was likely coined in relation to this coffee-house. The establishment owes its immense popularity to being at the epicentre of old Cairo life - lying on the cusp of the overlapping meeting places of the Khan al-Khalili bazaar, the 1000 year-old al-Azhar University (the world's oldest university), and the Sayyidna al-Husayn ibn Ali Mosque, where the head of one of the Prophet Mohammed's grandsons is said to rest.

With its tucked-away location, partial open-air view, and antique disposition, al-Fishawy has long been a magnet for intellectuals, musicians, artists, and writers. Today, local and out-of-town Egyptians mingle with foriegn tourists and expats beneath the old oil paintings and enormous mirrors with guilded Arabesque frames. A steady stream of stray cats, child urchins and trinket salesmen move through the alleyway seeking to capitalize on the daily gatherings of humanity.

In addition to the staple coffees and mint tea, the cafe serves kirkaday (a deep-red hisbiscus tea said to have curative properties), fresh lemonade, and sahlab (a hot milky drink consumed in winter and topped with nuts and raisins).