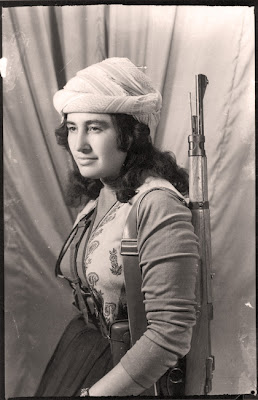 Margaret George, an Iraqi Assyrian Christian, joined the Kurdish resistance movement in Northern Iraq in 1961 at the age of 20. One of the first female rebels in the history of the Kurdish resistance, she quickly asserted herself as a capable fighter, commanding at the head of an otherwise all-male unit.

Within just a few years she became a legendary hero figure whose military exploits, bravery and leadership in the isolated mountain passes of Northern Iraq echoed throughout all of Kurdistan. Iraqi Kurdish leaders deftly transformed her into a local version of Joan of Arc and handed out portraits of her to the peshmerga rank-and-file who carried her photos into battle in the manner of a talisman.

“Margaret liked people to buy photographs so they knew she was a peshmerga and so that other women would go to the mountains like her,” says Zaher Rashid, George’s portraitist, who photographed her at his studio in the town of Qala Diza, near the border with Iran.

Accounts of Margaret’s life - and death - are sketchy at best. Depending on which version you believe, she is said to have met her end in 1969, after many difficult battles, either at the hands of a jealous lover, or the rebel Kurd leadership, the latter of which viewed her popularity and Assyrian nationalism as a threat to their interests and designs.

To this day, Margaret George remains famous among Assyrians and Kurds and some Kurdish fighters still carry photographs of her.

The photos included here are those of Zaher Rashid published in Susan Meiselas’ Kurdistan: In the Shadow of History. 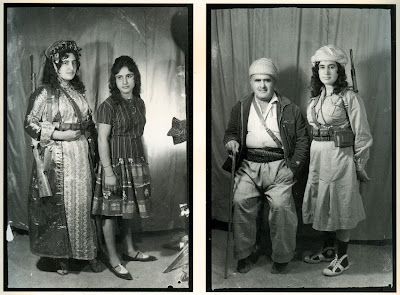 Margaret George posing in traditional Kurdish dress with her sister (left); and with her father in military gear (right).
Posted by John and John at 11:39 PM 2 comments: 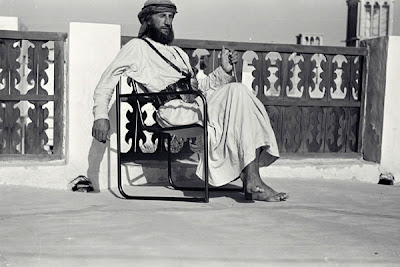 “In Arabia I kept my camera in a goat-skin bag to protect it from the sand – and have done so ever since.” - Wilfred Thesiger

The late Sir Wilfred Thesiger (1910-2003), one of the 20th century's most intrepid explorers is remembered for his works of travel literature documenting vanishing cultures, and namely for his landmark books, Arabian Sands and The Marsh Arabs. Few people know, however, that he was also a prolific photographer, having taken thousands of human portraits and landscapes throughout his travels into some of the most isolated parts of Africa, the Middle East and West and Central Asia.

What started off as curious experimentation with his father’s Kodak roll film box camera turned into a lifelong passion for documenting traditional peoples and places that were then on the cusp of an irrevocable transformation at the hands of the modern world.

“I started to take photographs when I hunted in the Danakil country immediately after I had attended Haile Selassie’s coronation,” Thesiger wrote later in life, referring to the time he spent as a young man in Abyssinia in the early 1930s.

Carrying a Leica II 35mm camera, some Ilford black-and-white film, and a yellow filter, the explorer took advantage of his intimate access to places off-limits to most foreigners to take some of most remarkable photographs of his time. Travels to Hazarjat and Nuristan in Afghanistan, the tribal areas of modern day Pakistan, Sudan, the Empty Quarter of Arabia, Kurdistan, Yemen and beyond resulted not only in the adventures that would inform his prose, but also a corpus of first class documentary photographs that would endure into the next century.

Thesiger had an instinctive sense of composition but admitted to having very little technical knowledge of photography. Yet his images evoke a sense of effortless mastership. His human subjects are all the more memorable, not only for inhabiting what are now long-lost epochs, but because they knew little or nothing of photography and therefore adopted no self-conscious poses.

Most of all, Thesiger’s photos powerfully invoke the passion, pain and inconveniences of old world travel in all of its patient detail.
* 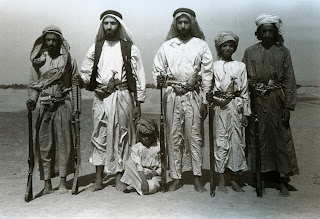 Second from the left, the late Sheikh Zayid bin Sultan al Nahyan, a highly respected leader of the Bedu, and former President and founder of the United Arab Emirates. 1947. 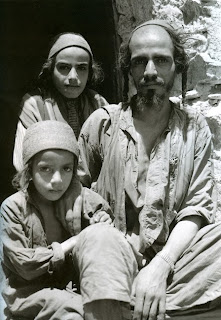 Iraqi Jews living in the Hajar region of what is today Iraqi Kurdistan. 1950. 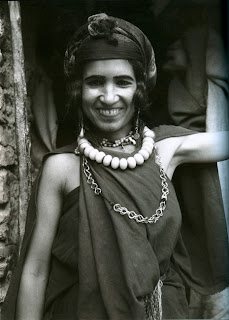 Morocco. 1955.
A compilation of Thesiger's best images can be found in his photo book, A Vanished World.
Posted by John and John at 9:35 PM 2 comments: