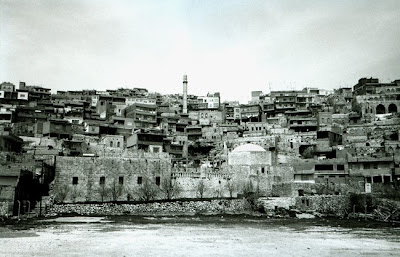 All photos and text in this post copyright John Zada and John Bell 2008
Mention to anyone in the Middle East that your family comes from a town in Turkey that was once a part of Syria, and is today located just north of the Syrian border, and you will invariably be told that you must be from either Iskinderun or Antakia. A good guess. But travel 200 odd miles east along the Turkish-Syrian frontier from either of these former Syrian cities, and you will reach an unusual-looking hillside town with a commanding southern view over the baking Mesopotamian plain.

This is Mardin, a city of pigeon flocks and old stone homes situated on the far cusp of the Arab world. It is also a place that is strangely unknown to the vast majority of Middle Easterners. Located in the heart of the Kurdish-populated southeast Anatolia region of Turkey, Mardin was up until recent times a kind of microcosm of the Middle East. An important Silk Road station, the town brought together disparate ethnic communities from all across the interior of the Levant, Northern Mesopotamia, Iran, and the Caucasus. These included Syrian and Bedouin Arabs, Turks, Kurds, Armenians, Jews, Assyrians, Nestorians, Yezidis, Chaldeans, Syrianis, Nestorians, Chechens, and Turkomen - all of whom shared the tiered cobblestone byways of the city's old Arab medina built of a light coloured amber stone.
Mardin was the northernmost outpost of Arab culture before the deep hinterland of the non-Arab Middle East began - those rugged mountains where the flanks of the Turkish and Iranian empires collided and mixed with the Kurdish and Armenian nations to form a primeval confluence of blood and belonging. All non-Arabs that settled in Mardin were inadvertently Arabized as though by some strange and unexplained law of nature. A typical “Mardeli” (the word denoting a person hailing from Mardin) spoke a brusque dialect of Levantine Arabic (also called “Mardeli”) that was as coarse to most Arabs as the Sicilian dialect of Italian is to most mainland Italians today.

From its establishment as a strategic outpost in early antiquity, Mardin has always been a frontier town in the truest send of the word. It has manned the edges of numerous cultural empires whose beginnings and ends were measured and marked by the transitions between peoples. Babylonians, Hittites, Assyrians, Urartians, Persians, Romans, Arabs, Selcuk Turks, Mongols, and Ottomans all made use of this hillside perch that dramatically announced the end of the plains and the beginning of the mountains. 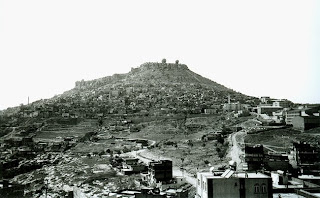 But with the coming of the modern age, as tribes and nations adopted or were forced to accept the practice of strictly demarcating their territories, Mardin fell into decline as a multi-cultural experiment without borders. The political upheavals of the early 20th century - massacres and ethnic resettlement programs - sent the Mardelis packing. They were scattered like seeds in the wind to places all across the Middle East - to Iraq, Syria, Lebanon, Jordan, Egypt and beyond. These were countries where they would be resettled and assimilated, but where deep inside they would belong to no place in particular - embodying instead, intangible notions and genetic memories of a rural cosmopolitanism based on tolerance.

Today, even more than in Mardin itself, echoes of that past can be seen and heard in Mardin's satellite towns of northeast Syria where some semblance of that original admixture of peoples - the "Mardelis" - still resides: towns like al-Qamishle, Hassake, and the Euphrates River town of Deir al-Zor.

The pigeons, the old stone palaces, and murmurs of a dilapidated Arabic still abide in Mardin - but under the watchful gaze of a Turkish military garrison peering suspiciously across the frontier into Syria and engaged in an unresolved local conflict between cultures that once knew few divisions.

There is a 1999 Turkish "Proganda", directed by Sinan Cetin about this region of Turkey. It's a Turkish comedy about de-Arabizing and Turkifying the population but has some examples of the kind of Arabic/Turkish dialect you mentioned.

A fascinating item. Have you just come back from the area?

I passed through there several years ago while on a research trip to the area. My father's family hail originally from Mardin, which they left as refugees around 1915, eventually making their way to Cairo. Having heard so many anecdotes about the place, i couldn't resist making a trip.

I'm planning on another visit sometime soon to do the place proper photographic justice. It is in my slightly biased opinion one of the most interesting regions of the Middle East..

hi john,
i was doing some researching about mardin, an asignment that i have, i cant help but ask you what your family's name is, as my great granfather also arrived at cairo 1915..i currently live in egypt.

am studying anthropology,and am writting a paper on the food and culture of mardin, so if you could help me in a way i would really appreciate it.

Hello John and posters of the blog,
Being a Mardin born and raised person I really liked the blog. And if you posters of this blog have any questions and comments please feel free to ask. Because I believe my city deserves to be known and to be revealed the stories that was hidden by anger long before. So, a mutual contribution based on what you know about the city, but not from a point of view of a bookish style, would really be appreciated.

the contribution of Mardin is very interesting, I come from Lebanon, my ancestors come from Mardin.

We belong to the group of Mardellis to.

I found your approach very interesting especially considering the fact that their are very few contents on Mardin on the net.
I have created a facebook page on Mardin a little while ago and I posted your article. If you want to have a look: https://www.facebook.com/mardinlovers

Hey Zeyni, my dad is from Mardin and we lived in Turkey for most of our lives and moved to the US about 20 years ago. Both of my grandparents from my dad's side passed away therefore I don't know whom to ask about our ancestors. My dad was born in Mardin and his side of my family is Arabic. Do you have any idea on where the Arabic speaking families of Mardin are from? I assumed it was Syria since its right beside it but he says it's neither Syria nor Iraq. I would appreciate any kind of information. Or is there a place/person that I can ask these questions to? Sorry if you don't have any info, I just assumed you might have an idea since you were born and raised there. Hoping to hear from you even tho it's been 8 years since you've posted this hehe. Thanks in advance!

This thread is not fully correct. First of all the Mradin dialect belongs to the Northern Mesopotamian dialect (not Levantine!) and it branch name "Queltu" wich is also spoken in the Jazira (northmesopotamia: Mossul etc.). Despite this still there are regional differences. The Mardin city arabic is still different from the Arabic west of Midyat wich still belongs to the Mardin province. Its central arabic influences (most of the tribes wich settled in Mardin were from central Arabia (Najd) shouldnt be forgotten.