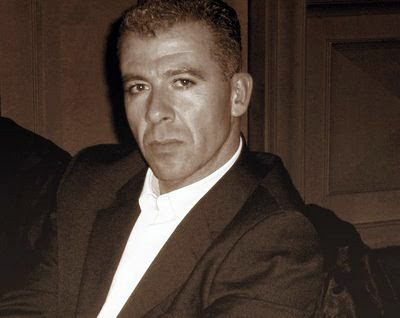 Reconstructions of skulls of Jews living in Galilee at the time of Jesus show a face a little more robust than the ‘Roger Moore’ look-alikes, the haunted blonde archetype, that signify the Christ for modern Western Man. It is likely that Jesus did indeed look more robust than these fair depictions: the azure eyes are basically not very likely.
Nassim Sayah, a friend of mine from Aalma As-shaab, a village in the south of Lebanon, a stone’s throw from the border with Israel, has a Gallilean’s skull. And, like Jesus his possible ancestor, it is sure that it his eyes speak a kind of truth. They are golden, and twinkle about some hidden secret.

The region he comes from is a rural suburb of Galilee, an area of olives and blue sea between Jerusalem, Acre, Tyre and Sidon. Beyond, to the east, lies distant Damascus, beyond Mount Hermon, "Jabal el-Sheikh" as it is called, for the snow on its peak is reminiscent of the white skull caps that elders here, “sheikhs”, wear.

Nassim survived the 22-year occupation of southern Lebanon by the Israelis, miraculously and happily managing to avoid serving in Israel’s proxy at the time, the South Lebanese Army. This is despite the fact that he’s a sure shot, practiced in years of boar hunting in Aalma, and is an excellent diver among the rocks of the nearby Mediterranean. His family has adapted, somewhat, to the presence of Hizballah who are now in the South.
He’s done some strange things in his life from working at the medical station for the UN peacekeeping Force in the South, to running a restaurant in Stockholm, to being the driver, majordomo and security detail for the Personal Representative of the Secretary-General of the United Nations for Southern Lebanon.

Nassim is very ready to help anyone who comes across his path. He lifts, picks up, fixes, soothes and caters to the views of a Noah’s Ark of opinions and characters. The smile rarely leaves his face. He does get frustrated occasionally, feels unappreciated, but this does not prevent him from continuing to be of service in every way – a boon to anyone who comes across his way.

He’s not a big believer in religion, he plays trump, and he likes to drink Almaza beer. He befriends all faiths, all colours, and assists anyone in his path. 22 years of war, of shelling, fear, and terror have left him strong, self-reliant, joyful and hating no one.

All text in this post copyright John Zada and John Bell 2008
Posted by John and John at 7:34 AM

Fabulous in the Holy Land said...